Not so Keene on Copyright


For a time around 1980 I was Secretary of AIPE (Association Internationale de la Presse Echiquéenne), the international association of chess journalists. When Svend Novrup took over as President of AIPE in 1977, he asked me to become a member of the board. Kevin O’Connell assumed the role of Treasurer (he also edited AIPE Chess News). The photo was taken at the AGM of the association at Valletta in 1980, where Raymond Keene chaired the proceedings. Three years later I was to run into Raymond Keene again, but then in far less pleasant circumstances. A blatant disregard of copyright compelled me to engage the services of a London-based solicitor in order to come to terms with the organisers, headed by the one and only Raymond Keene, of the World Championship Candidate semi-finals in London 1983. Any illusions that I might have had in my previous dealings with him were quickly shattered. An Englishman, yes. A gentleman? Anything but.

The organisers contacted me and asked if they could buy some photos I’d taken of the four World Championship Candidates – Gary Kasparov, Viktor Kortchnoi, Zoltan Ribli and Vasily Smyslov – for the sole purpose of publishing them in the programme booklet. Naturally I agreed and posted the photos, clearly stamped with my copyright.

Imagine my surprise therefore when, on entering the press room at the Great Eastern Hotel in London, I realized that my pictures were handed out for free to all accredited journalists (some 200 people), with permission to use them as they saw fit! Of my copyright mark on the reverse of the photographs there was no trace; instead they had a notice to the effect that it was the match sponsor, Acorn Computers, who so generously provided the pictures. To add insult to injury, those four photographs had also been used in a full page advert for the forthcoming matches in The Times.

By the time I got hold of Raymond Keene, who was in charge of the matches, I was already fuming. His arrogant manner just made matters worse, and then he did something I’ll never forget. As Keene’s wife entered the press room, he caught sight of her over my shoulder, and in his supercilious accent he signalled that he was just going to ignore me: ‘Annette, let’s go to the bar.’ In that moment I showed a level of restraint I didn’t think myself capable of. I’m a peaceful man (I’ve never even been in a fight), but there and then I came as close as I’ll probably ever get to do what Sweden’s former world heavyweight champion Ingemar ‘Ingo’ Johansson did to Dick Richardson 2 minutes and 13 seconds into the eighth round in Gothenburg on 17 June 1962 to regain the European champion’s belt. Somehow I kept my pugilistic instincts in check, I didn’t punch Raymondo’s lights out. Instead I decided to look into the matter of whom I could demand payment from, since it was glaringly obvious that Keene had absolutely no intention of stumping up.

However, an initial exchange of letters with a representative of Acorn Computers proved futile and fruitless; it quickly descended into interminable waiting moves. They weren’t even prepared to pay the small fee that I’d originally demanded for the publication of the photos in the programme booklet. Clearly, stronger measures were called for. I turned to a solicitor.

It was a relief to hand over the stalemate to a second, as it were, who took the requisite steps. A letter dated 1 March 1984 from my solicitor to the counterpart explains the matter in legal terms.

Mr. Lars Grahn, Malmö, Sweden, has instructed me to answer your letter to him of February 20, 1984.

When Mr. Grahn originally delivered the photos to the British Chess Federation, they were marked “Copyright LARS GRAHN” on the back.

The unagreed use of Mr. Grahn’s photographs has been extensive. They have been generously handed out to journalists, they have appeared in magazines and in the press, for instance in a full-page advertisement for Acorn in the Times, November 21, 1983. Not in any of these instances did Mr. Grahn receive credit as the photographer. Mr Grahn’s letters in the matter, from December 4, 1983, has not been properly handled until your letter of February 20, 1984.

The copyright infringement in this case is extensive and serious. However, Mr. Grahn is still prepared to settle the matter amicably, provided he gets a reasonable remuneration. The GBP 600 must be considered as very reasonable for the extensive use and the non-crediting, wherefore Mr. Grahn cannot settle for less. It must also be understood, that such a remuneration does not include any further use of the photographs.’

This letter received no response, and on the 18 April 1984, my solicitor formulated a reminder. Still complete radio silence. A second, more strongly worded reminder was issued:

‘The situation is now becoming very serious indeed, especially in the light of you not answering my letters. Unless Mr. Grahn has received GBP 600 and a confirmation that his photos are no longer used in any way within seven days from today, Mr. Grahn will be forced to take legal action against you. Such action will be taken without further notice.’

This shot hit home. At long last things started moving. When they asked me to reduce my demand a little, I accepted. At that point, nearly a year after the original incident, I just wanted an end to it all.

Funnily enough, in February 1984 I received a letter from the BBC informing me that my photos had been used in one of their television programmes. In their letter they also asked me for details of my bank account in order to transfer the appropriate fee. A correct approach in every sense of the word, and a refreshing morale boost at a time when I was bogged down with the anything but correct Keene & Company.

This sorry saga, and other subsequent events, made me realize that Raymond Keene never takes responsibility for anything that he doesn’t want to know about – not even when he’s in charge. 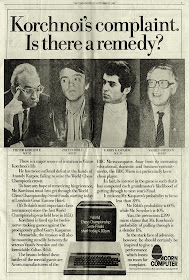 Full page advert in The Times with my photos.